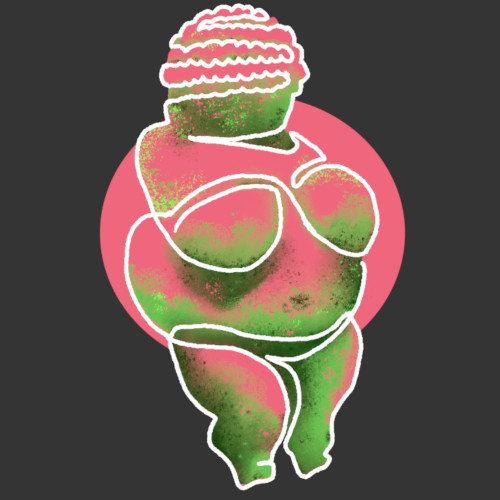 It is not always easy to determine what prehistoric art is. The difficulty lies in the meanings of the words "prehistory" and "art." They are far from unambiguous. What is "prehistoric" and what is "art"? Below you can read an attempt to answer these questions.

This is art and prehistory

Sure; some cases of prehistoric art leave little room for discussion. Everyone thinks that the cave drawings that Cro-Magnon man left behind in The Dordogne are a form of prehistoric art. These drawings are examples of the oldest art in the world. The same goes for the small Venus statuettes, or mother goddesses of the same period. Not that the creators were aware of that. It was not art for them. Rather, they were visual incantations or aids in initiation rites. Nothing more than that. Only we modern people think it is prehistoric art. But what happens when we push the boundaries of the concepts of 'art' and 'prehistory'? Do we still know for sure what belongs to it and what doesn't?

Let's start with art. Roughly speaking, that word stands for the creative expressions of people. In the case of prehistoric art, this is quite confusing. Paleoanthropologists do not agree among themselves when history refers to a hominin and when to a human being. And what a creative expression is cannot be defined quickly. Without getting into technicalities and jargon, this is perhaps best understood with an ax as an example.

First, imagine a hand ax from the Neolithic, the last period of the Stone Age. The most beautiful specimens are smooth-ground, symmetrical ornamental objects. They are technical feats, balanced in design from beautiful materials that are difficult to work with. Completely useless. At least, in our view, because you can't cut down a conifer with it yet. To its creator, this ornamental ax may have served as a valuable status symbol or an impressive sacrificial object to appease the gods.

The ornamental axe is art

The craftsman who made the ax has admirable skills. He can think clearly, learn and patiently work difficult material. He is also good at working together and communicating clearly. He is probably working a field somewhere. His appearance is cared for, albeit in a different way and by different means than we do today. This man is undeniably creative. It doesn't take much good will to call his creative expression 'art'.

One ax is not the other. The development of stone tools spans a long period of time that includes growing skills and groundbreaking innovations. With the oldest specimens you hardly see any difference compared to a normal stone. Yet these are comfortable in the hand and you can process material with them extremely effectively. That's no coincidence. A distant ancestor carefully selected the original stone. Then he turned it into a useful tool based on his experience with some skill.

Is an old hand axe art?

You may wonder whether the maker is human. It may be a humanoid. The boundaries are vague and have to do with learning capacity, communication skills and physiological characteristics. The creator of an ancient fist ax may not even be able to speak. Does he make art? Frankly, I dare not answer that question with certainty. And actually, I also doubt the 175,000-year-old underground stone circle that Neanderthals built near Bruniquel. The same applies to the shell necklaces from the same period.

Is a dolmen a form of prehistoric art? I think it is. Not only because dolmens are so beautifully situated in the landscape, each with its own distinct character. But especially because they are creative expressions of people from an undeniably prehistoric period. But sometimes it is quite difficult to determine what a prehistoric period is.

The definition of Stone Age or prehistory only appears simple at first. It's the history; the time when nobody writes yet and about which there are therefore no written original sources. Although that last one isn't quite right. There are descriptions of peoples who cannot write. An example of this is "War in Gaul" by Julius Caesar. Does that make the Gauls and other Celts prehistoric? Many scientists don't think so. That is why the term 'protohistory' exists for these kinds of doubtful cases. I personally classify Celtic artifacts as art without hesitation, but not as prehistoric art.

This shows that the concept of 'prehistory' does not only exist as a result of the time factor, but also as a result of the space factor. The implications of that finding are far reaching. Numerous peoples find themselves drawn into the sphere of influence of Western civilization since the colonization of their own Stone Age. This is a process whose destructive character is difficult to exaggerate. Entire cultures disappear or become irreparably disrupted. Forever.

Art and prehistory in Australia

It is already impossible to determine when prehistory will end in Europe. What about a continent like Australia, for example? The original inhabitants made beautiful art before the Europeans came and they still do. Their Cave drawings of the past thousands of years are dizzying and can easily compete with numerous contemporary art expressions. Is it prehistoric art? And when and where was the prehistoric character lost? I really have no idea …

No art and prehistory

At the very beginning of this text I already stated that many people involved agree that we can see the European cave paintings and Venus statues as prehistoric art. After that it turned out to be difficult to indicate how far this category extends. Therefore, it might be interesting to think about the opposite of prehistoric art. If prehistory is at one end of the art spectrum, what do we see at the other end of it?

Lascaux's cave drawings radiate magic, mystery and symbolism, as if the painter wanted to get a grip on the world around him. Painters from the Renaissance are diametrically opposed to this. They mimic reality to perfection without any ambition to change it with their painting. Symbolism and magic have given way to technique and reason. The focus is on man as the center of the universe. There is little art that is so obviously not prehistoric.

The nice thing is that art that is further from prehistory in time than the renaissance can be closer to prehistoric times in design, spirit and execution. Take, for example, the works of AR Penck. This artist uses a formal language that is strongly reminiscent of cave drawings. The ratio seems far away in his work that feels emotional and seems to be full of symbolism. It is not for nothing that his work is a form of primitivism. In the timeline it is far removed from prehistoric art. Despite this, it is more prehistoric than the Mona Lisa.

The same goes for a lot of ethnic art. Whether it's African masks or decorated Polynesian boats, magic and symbolism play an important role. In time and space, Lascaux's cave drawings are greater than that of the Vitruvius man, but in spirit and in purpose it is closer. Just like the art of AR Penck and other primitivists.

The search for the conclusive definition of prehistoric art turns out to be longer and more complex than initially expected. Even though there is art that is undeniably prehistoric, some art is more prehistoric than others, without time and place being relevant factors. Cultural context or the artist's personal intentions appear to be much more important on this sliding scale. Of course, not everyone can now make prehistoric art, but it is certainly possible to get to the essence of it and create great art. Picasso knew that. Every artist can give space to the primal man who still lives deep within him.