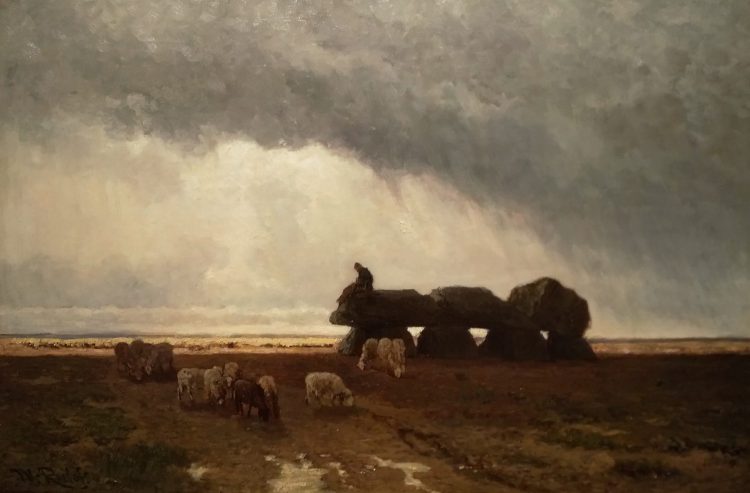 Drenthe inspires. Jozef Israels, Hendrik Willem Mesdag and Vincent van Gogh know all about it. The Drents Museum in collaboration with Het Drentse Landschap lists the artistic achievements in the exhibition Barbizon of the North. The subject is the discovery of the Drenthe landscape from 1850 to 1950. The best news: There are Dutch dolmens.

After the invention of the paint tube and the field easel, painters were able to work in nature at the end of the nineteenth century. Or 'En plein air' as it is called in artist circles. With the wind in your hair, sunbeams on your skin and your nose in the fresh air! That is a huge improvement compared to working in the studio, where contact with the landscape is a lot more distant. Perhaps the most important thing is that in the field the subtle effect of light can be seen in all its aspects. In this way, in its entirety, it can become more realistic with quick strokes on the canvas. The way to Impressionism is open.

The first place where painters met each other in the nineteenth century to paint in the open air was Barbizon. It is near Fontainebleau, just south of Paris. It is easily accessible to painters such as Théodore Rousseau, Jean Baptiste Corot and Jean-François Millet. With moody colors they give shape to their realistic art from 1830 to 1870 on the spot. The idea has caught on in other European countries. Colonies are popping up like mushrooms. Just think of Tervuren in Belgium or Skagen in Denmark.

Barbizon of the North

The Netherlands has several places where artists meet and enjoy nature. Domburg and Bergen are perhaps the best known. But don't rule out Drenthe! Places such as Zweeloo, Rolde and Vries attract very skilled painters. They often linger for years and make beautiful work. The most famous is Vincent van Gogh. He travels to the poor peatlands and makes social realistic art. This is in contrast to the rest, which mainly depict the wild nature of the sandy soils. Barbizon of the North show how virtuoso they are in it.

Dolmens in Barbizon of the North

personally I am particularly interested in the art of dolmens. I see beautiful work in the Drents Museum:

And that's not all. More works of art with dolmens are depicted in the accompanying exhibition book. The depot and the outside world hide even more treasures. The variety of the works in the exhibition is great. The work of the pointillist Briedé is particularly striking, as is Berend Groen's stylized dolmen, which does not have a tree or shrub in sight.

I can't resist making some notes myself in my booklet and get busy with watercolor and fineliner. I choose three works. First that of Bosnak-Nagtegaal because of the angular pointed shapes and the contrast between red and green. The next is the dolmen in the Emmerdennen of Wenckebach, because there is so much air in it and room. Finally I venture to the dolmen of Kruseman van Elten, especially because I want to indulge in the contrast of blue and orange in the sunset. Yes, I'm crazy about color contrasts and I enjoy releasing that on dolmens.

Conclusion Barbizon of the North

Drenthe inspires. Then and now. I love to see how craftsmen interpret dolmens in their paintings and I try to learn from them by looking closely and reinterpreting. In addition, it is also enchanting to see how the skilled hands of countless painters capture other parts of the Drenthe landscape and catch the people who live in it forever in paint. It is a pity that these works have only been together for a short time, but it is wonderful that it is possible to view them in this context.