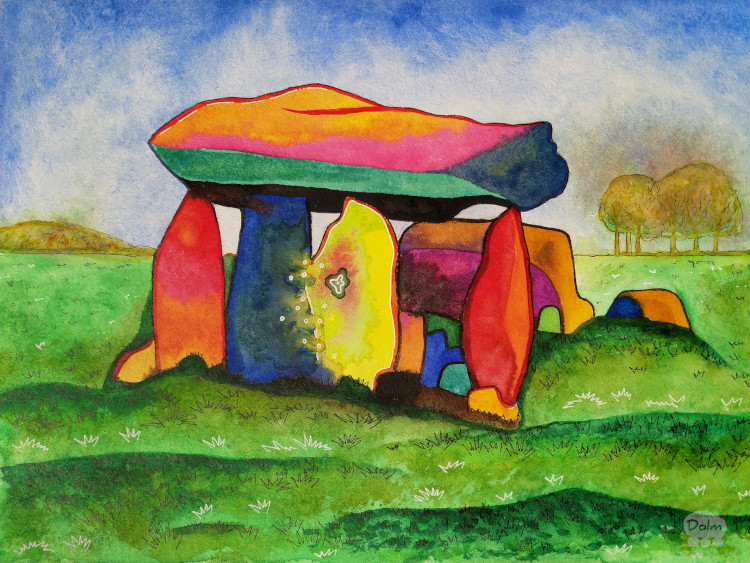 Was Easter an important festival in some form before the resurrection of Christ? It looks like that. But what do we actually know about Easter?

To start with prehistory; its main feature is that we have no written sources about it. A primeval man could neither read nor write. That means that we know little or nothing about their spiritual life. We can, however, deduce a few things from the stones, the bones, the art and the DNA that our ancestors left behind. Ancient writings also make us wiser about ancient traditions.

Despite this, we know absolutely nothing about spring rituals of our very earliest ancestors. For example, there is no reason to believe that Neanderthals painted eggs. The same cannot be deduced from the cave drawings of the earliest Homo sapiens. It may be that hunters and gatherers did something special with the spring, but that has not left any traces as far as we know now. The earliest indications of something resembling an Easter experience date from a later part of prehistoric times.

Societies changed around 10,000 BC, partly as a result of the end of the ice age. The first agriculture arose. As a result, some innovative people chose to no longer move around, but instead settle in a permanent place. These first farmers marked their land, over time with stone structures as dolmens, among other things. Originally these were hills with an entrance; there was still grit and earth over the large stones that now remain. The dead were given a place inside.

Looking closely at some of these buildings from the Neolithic - the last stone age - something special stands out; the entrances often point in the direction of the spot on the horizon where the sunrise of the shortest day occurs. As a result, the sun only shines straight in at that precise moment. That is special: On the day that the light returns – the present Christmas – the final resting place of the deceased lights up. Can it be more symbolic? This phenomenon does not take place at the Dutch dolmens in Drenthe, but it does occur at some burial mounds in Ireland and England, for example.

Three months after the shortest day, at Easter, the sun is exactly halfway through its journey. The day is then as long as the night. It is the beginning of spring. Such markings were extremely important to the first farmers of Europe. How else could they deduce when to sow? And when the day is as long as the night, the dead nature comes back to life. That is, in fact, also a kind of resurrection.

The placement in relation to the sun and moon does not only play an important role in certain burial mounds. The same goes for stone circles like Stonehenge. In that respect they are gigantic astronomical calendars. At the end of prehistoric times, structures such as Stonehenge existed in several places in Europe in a wooden version. So those early farmers knew very well when the astronomical spring began.

The nice thing is that we are still looking to the sky to determine the date for Easter; it takes place on the first Sunday after the first full moon in spring. And with that we have the basics of the liturgical calendar: we celebrate Ascension 39 days after Easter Sunday. Pentecost is the seventh Sunday after Easter. As a result, Whit Monday falls ten days after Ascension. In that respect we hardly differ from the Neolithic peasants. We look to heaven to determine and celebrate the beginning of the resurrection.

Apart from the burial mounds and the astronomical calendars, there are other indications that the first day of spring and resurrection played an important role very early in history. For example, we know from ancient writings that the Sumerian goddess Inanna came from the underworld and was set upright on a stake. That was her resurrection. The Egyptian god Horus also experienced a rebirth.

In the Roman Empire, the cult of the mother goddess Cybele was of great importance. Her lover Attis – a Phrygian god born of a virgin – experienced a resurrection from the dead every year with the onset of spring. The festivities started with a bloody day on Black Friday and ended after three days with the joy of the Resurrection. Cybele has been around since at least the sixth century BC. Attis since the third century BC.

We also know the Jewish Easter. That too is older than the Christian Easter. It is called Passover and it marks the end of the slavery of the Jewish people and the exodus from Egypt. The seider is central, a festive meal in one's own home. Jesus of Nazareth celebrated with his disciples at the last supper. Passover occurs on the first or second full moon after the vernal equinox.

All this suggests that Easter eggs, Easter fires and the Easter bunny also have deep pre-Christian origins. However, such traditions probably do not go back further than the Middle Ages. The same goes for the origin of the numerous chocolate eggs in aluminum foil.

But still: The first farmers were concerned with solstices and seasons. They did their utmost to interpret these times and to give meaning around the themes of life and death. Early classical societies had stories and myths of gods and heroes dying and resurrecting with spring. Easter was already a Jewish holiday when Jesus of Nazareth celebrated the Last Supper. And we still determine the date for Easter based on the position of the sun and moon. It would be going too far to say that Easter predates Christ, but some related elements and customs certainly do.

This article appeared simultaneously in Carillon, magazine of Insula Dei and Huize Kohlmann